So now you have your working mail server. But how do other mail servers get to know you? The answer lies in the most important service on the internet: DNS. Assume that a mail server somewhere on the other end of the internet wants to send an email to john@example.org. The server must find out the name (and IP address) of the mail server responsible for the example.org domain. This is how that works: 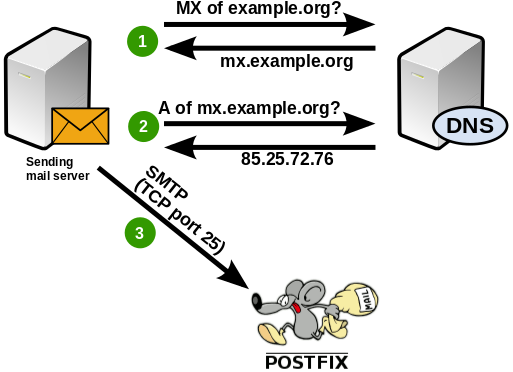 The remote server queries its DNS server for the MX (Mail eXchanger) record of the “example.org” domain. (If no MX record was found it tries again and asks for A (address) records. That’s a fallback solution.) Let’s run a query for a real domain to get an idea. Let’s ask which servers receive email for …@gmail.com.

(In the above example it is very unlikely that a mail server will ever have to use the server with priority 40. Adventurous system administrators can add such a low-priority entry and see who connects to it. An interesting observation is that spammers often try these servers first – hoping that it is just for backup purposes and less restrictive or lazily configured than the main server. If you see someone connecting to the lowest-priority address first without having tried a higher-priority mail server then you can be pretty certain that it’s not a friend who’s knocking at your door.)

It’s best to explicitly name mail servers explicitly for your domain in the MX records. If you can’t do that for whatever reason then the remote mail server will just do an A record lookup for the IP address and then send email there. If you just run one server for both the web service and the email service then you can do that. But if the web server for your domain is located at another IP address than your mail server then this won’t work.